A short time ago Pussy Janeway ran in with a mouse in her chops. Pussy Kirk wanted it. There were words between them (a little muffled in Janeway's case). Janeway ate half the mouse but this time had the manners to leave the other half for me. Ooh! Fresh hind end of mouse! But I have just had breakfast.
Posted by Valda Redfern at 7:34 am No comments:

Paddy and I have just done a deal with our neighbours. We'll swap our cats for their grandchildren. No doubt they'll bitterly regret the decision, having no idea how troublesome a pair of tabbies can be, but a deal's a deal and we will stand firm.

Later
Sue and I have agreed a contract amendment: Paddy, Stan, the cats and the grandchildren will all be made to live outside. (It's OK - both households have garden sheds.) The men and the cats will be allowed to visit during the hours of darkness, but not the grandchildren.

This is how life is lived in suburbia.
Posted by Valda Redfern at 9:41 pm No comments:

The cigar slave is a superior kind of slave. Not for him the lowly tasks of the farmyard and scullery. He is to be found in the upper apartments of the villa, elegantly if scantily clad, lolling about on couches. His job is to smoke cigars for me. I would smoke them myself, if only they tasted as good as they smell. But since the smell of the cigar is the whole of its attraction for me, the cigar slave puffs fragrant clouds of smoke into the air on my behalf. Ah... that's good.

I have thought of getting the cigar slave to smoke pipe tobacco as well, but pipes are a little too fragrant. He can smoke those on his own time. Oh - I forgot, he's a slave, so he doesn't have any time of his own. Well then, in between bouts of cigar smoking, he can open oysters for me. I don't know if there is any natural limit to the number of oysters I can eat at a sitting, apart from availability, and I need to find out before my next visit to Galway.
Posted by Valda Redfern at 12:57 pm No comments:

The beam in my own eye

I like Nora Roberts and have read many of her books, including some that feature sorcery and celtic mythology. One thing that I objected to in those however was her use of the word "mote" in spells - eg

And each cross of silver a shield will be. As we will, so mote it be.

The silliness of rhyming spells was bad enough; but "mote", I thought, was not an auxilliary verb, and I couldn't find it in the Concise Oxford either.

You have to be careful, though, before you castigate a favourite, so I looked for "mote" on the web and lo!

I see now that it's also in my 1955 edition of the Shorter Oxford Dictionary. ("Shorter", by the way, does not mean short: the SOD contains over two and a half thousand large format pages and weighs eight pounds.)
Posted by Valda Redfern at 10:07 am No comments:

I heard on Radio 4 that the Belgian entry for the Eurovision Song Contest would be sung in a made-up language (and no, it won't be Belgian). The band, Ishtar, gave a brief rendition during the interview - they had to stop after a few bars because they forgot the words...

If you play the video and can get past the prancing around on stage, you might notice that the lead singer has a lovely voice.
Posted by Valda Redfern at 8:56 am No comments:

I've had this wonderful picture on my desktop for a few years now: 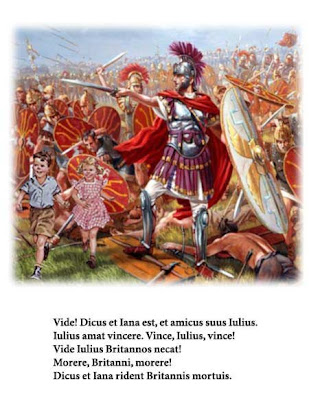 I don't know where it came from, but I've heard that rogueclassicism might have more information.

The Dick and Jane Hamlet is also educational - an excerpt:

Dazed with look-say admiration, I can only exclaim "airplane!" But I was probably meant to say "up" - as this article explains:

The Scott, Foresman series was heavily illustrated with pictures intended to help new readers associate a word with its meaning: a picture of Jane and Sally looking up at Dick's flying airplane above a few lines of text repeating the word up, for example.

That's enough about Dick and Jane. Richard J King has an interesting post about a corrective, the Dr. Seuss books. He identifies two reasons for their success: children loved the hilarious chaos created by the exuberant and irresponsible Cat; and they probably also found them easy to read.

Another important influence, albeit a largely indirect one, was Rudolf Flesch’s Why Johnny Can’t Read, published in 1955. This book argued that children’s primers were not just boring, but educationally flawed, based as they were on word recognition, by which children learn words by memorising them. Flesch, by contrast, proposed a system whereby children are taught to associate letters and groups of letters with particular sounds. This, it was argued, would equip young readers to make sense of unfamiliar words by sounding them out phonetically.

It certainly worked for me.

Update: I found the source for this very silly picture (and here's a translation)
Posted by Valda Redfern at 5:04 pm No comments:

Terrorism by other means

My friend Tom Minchin posted more news on libel tourism, or lawfare, on HBL , telling us of an interview in FrontPage Magazine with the laywer Brook M Goldstein. Here's what she has to say about the situation in Britain:

...UK libel jurisprudence, in direct contrast to US law and due process considerations, effectively operates to declare Defendants guilty before proven innocent and UK courts have become a magnet for libel suits...[S]o heavy is the burden of proof put on the defendant that the mere threat of suit in a UK court is enough to intimidate publishers into silence, regardless of the merit of their author's works.

A major player on this front is Khalid bin Mahfouz, a wealthy businessman who resides in Saudi Arabia and who has been accused by several parties of financially supporting Al Qaeda. A notable libel tourist, Mahfouz has sued or threatened to sue more than 30 publishers and authors in British courts, including several Americans, whose written works have linked him to terrorist entities.

Faced with the prospect of protracted and expensive litigation, most of the parties targeted by Mahfouz have issued apologies and retractions, while some have paid fines and "contributions" to his charities.

An earlier post from Tom Minchin on HBL drew attention to the publisher Ezra Levant, the victim of similar action in Canada. This link is to the first of a series of YouTube videos showing how he fought back against the Human Rights Commission in Canada, the vehicle used by Islamicists there to silence him and others. As Mr Levant robustly points out, free speech includes the freedom to offend - because the truth will always offend those who can't or won't see it.
Posted by Valda Redfern at 4:36 pm No comments:

Every time I have a hair cut my stylist asks me, "And how has your hair been?"

How does one answer that? I racked my brains, and here are some of the things I might have said:

"It was worn to a frizzle from all the traveling but bounced back after a week in the office."

"It's been dull and dispirited since I stopped the vodka rinses."

"It's just got engaged to a Rastafarian."

But in fact I only mumbled "Oh, you know, much the same..." as I mentally rehearsed my answer to the next question: "Have you got any holidays planned?"
Posted by Valda Redfern at 7:34 pm No comments:

Years ago, about to go to the supermarket during my lunch break, I asked my colleagues if they needed anything. "Yes, please!" cried one. "Get me a pack of Finish". I was stumped. Finnish? what could it be? Was it something like Danish - a sort of pastry, perhaps an iced bun? Or would it be more like polish - a sort of rubbing substance, perhaps involving steam and birch twigs?

Finish, it turned out, was a detergent for dishwashers. In those days I thought dishwashers unnecessary (I was young), so I'd never heard of it before.

The Polish connection made me wonder if vodka could be used for cleaning - and lo!

http://www.essortment.com/home/unusualusesfor_swnv.htm
Nothing can make your glass and chrome bathroom fixtures shine like a polish with some vodka.

Leonard Peikoff revealed in his February podcast on philosophy that vodka was his favourite drink (yes, it was on-topic - listen and discover how). I suppose he buys the best Polish. Does he know of its other uses?
Posted by Valda Redfern at 12:38 pm No comments:

Music of the gods

Want people to go home at the end of your party? Try putting one of these numbers onto the music centre:

I attended a public lecture on ancient Greek music in Oxford a few years ago at which they played a fragmet of the music for a tragedy (one of Euripides', I think). When the music started, there was no actual noise from the audience, but I felt a sort of collective gasp. The music was horrible - not because of incomprehensible dissonance, in the way of classical Japanese music, which is so alien to the Western ear as to seem hardly like music at all - but because of the all too comprehensible sense of overwhelming dismay it imposed. I have to say it worked: I can imagine no more effective accompaniment to a typical Greek tragedy. On the whole, though, I'd rather listen to the Czardas Princess.
Posted by Valda Redfern at 1:09 am No comments:

Planes I have missed

The first was a 19-seater Beechcraft from a small military airfield in Wiltshire to an even smaller civilian airfield in Cumbria. I missed it because I got lost in Bath (not actually on the way to the airfield), but my excuse was that floods the night before had blocked the minor roads I had planned to drive down. No harm was done: I just caught the next flight, a couple of hours later, and arrived all too soon in the lovely town of Barrow.

The second was an Air France flight from Lyons back to London. I missed it because I stayed too long at a meeting and was afraid to drive like a Frenchman in order to get back to Lyons in time.

The third was an EasyJet flight from Glasgow to Bristol. I was at the boarding gate early; but I fell asleep sitting there and woke just after the boarding for my flight had closed. Frequent red-eye flights have taught me to catnap, and I now do it too well.

I'm not a nervous flyer, and actually enjoy turbulence, but I am a nervous traveler. So many things could go wrong: setting the alarm for 4.00pm instead of 4.00 am; having the wrong id (I once brought my boyfriend's passport instead of my own); packing something illegal (I have no idea how that carpet tack got into my carry-on bag, but it didn't get through security); boarding the wrong plane (I've done that twice)... I may seem to have done every dumb thing I could have done at airports, but I fear there are more awaiting discovery.
Posted by Valda Redfern at 12:37 am No comments:

Getting rid of bugs

I have recently started doing Fagan inspections again. I favour Tom Gilb's variant, and thoroughly recommend the book he wrote with Dorothy Graham, but whichever approach you take, Michael Fagan is up there with the heroes of software.

Inspecting a document is a lot like de-fleaing a cat: you suspect it has bugs, but you have no idea of the scale of the infestation until you apply the pesticide and see hundreds of the vermin dropping from their victim.
Posted by Valda Redfern at 12:06 am No comments: 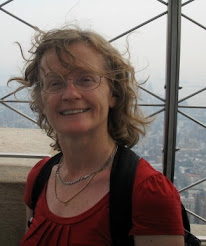